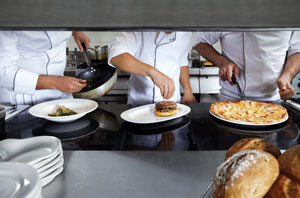 With starting wages rising to between $9 and $12 per hour in many states, and as much as $15 per hour in cities such as San Francisco and Seattle, the cost to produce your menu keeps getting more expensive. Twenty-nine states have set higher minimum wages than the federal minimum of $7.85 per hour, and many this year started indexing those to the cost of living.

Meanwhile, as the economy continues to improve, other industries are hiring potential candidates out from under you, making it increasingly difficult to staff your kitchens with qualified employees.

“As labor markets are tightening,” says Mark Godward, Principal, Foodservice Productivity Group, Miami, “any jobs that require skill—cooks, food prep workers—are going wanting. You can find people to do those jobs, but it’s hard to find people who do those jobs well.”

Some of those unskilled workers may become valuable—and skilled—employees with enough training and experience. But you have to spot the innate talent and convince them to stick around long enough. In the meantime, you still have a restaurant to run, and need to get more meals out with the same or less labor.

There are strategies that can help, experts say. While not all will deliver the results you may be looking for, with some trial and error you’re bound to find some that work well in your operation. The goal, Godward says, is to “use as little labor as you need, then try to make those employees as efficient as possible.”

Constantly evaluate each job in house. Old-fashioned time-and-motion studies break down jobs into small tasks and evaluate how each might be improved. “General managers, chefs, shift managers have to do it on a local basis,” says Josh Howell, Senior Coach at Lean Enterprise Institute, Cambridge, Mass. “They need to constantly evaluate the jobs in house and how they can be improved, which can make the work easier, ease bottlenecks and increase kitchen productivity.”

Training on-site managers or supervisors to conduct these ongoing time-and-motion studies is more effective and ultimately less costly than bringing in experts every two years to evaluate your operations.

Identify bottlenecks. Figure out where and when slowdowns occur. Is the problem related to equipment or people? If it’s caused by equipment, evaluate whether a new/better piece of equipment is worth the cost or if there’s a process solution that will alleviate the problem. If people cause the bottleneck, determine the best way to resolve the problem. Is more training required? Can another employee with a different skill set fill the position better?

“Say your drive-thru service slows up during lunch,” Godward says. “The bottleneck may be the employee assembling a popular sandwich during that daypart. To not lose sales volume, you have to figure out if you need to find someone who can assemble the sandwich faster or come up with an easier, faster way to assemble it.”

Streamline ingredient flow. “Ingredients that flow through the operation with greater velocity save labor,” Howell says. “The industry believes that fewer, larger deliveries means less cost, but what we’re learning is that there are savings in inventory, energy, real estate and labor by getting more or more frequent deliveries, as well as greater value in a fresher, higher quality product delivered to the customer. It’s easier to retrieve ingredients from a small storage room with fewer things than finding products in a large, messy storage room.”

Move ingredient storage closer to the point of use or service. Refrigerated drawers on the cookline, for example, can hold fresh meats, seafood and poultry as well as produce delivered that day for use that day.

Automate “skilled” tasks. “We’re seeing a significant move to automation in equipment,” says Steve Starr, AIA, President of Starr Design Team, Charlotte, N.C. One chain his firm worked with recently switched from open charbroilers to conveyor charbroilers in its new units. “We lowered cook time, and the equipment delivers cooked-to-order product with incredible consistency and high quality because we’ve taken the labor and guesswork out of it. It makes cooking less an art and more scientific and precise.”

As part of an energy-savings initiative, Arby’s recently changed its cooking platform from double-stacked convection ovens and separate holding cabinets under a hood to three cook-and-hold ovens and a countertop convection oven. The new set-up not only tempers and cooks the chain’s signature roast beef faster, it automatically tracks cooking time and temperature for HACCP records (formerly tracked by employees) and eliminates the need to transfer cooked product to a holding cabinet, saving stores about $3,400 per year in labor.

More operations are using equipment such as combi ovens, speed ovens, clamshell griddles and auto-fryers because they can be pre-programmed for specific menu items and are easy for non-skilled labor to operate. Combis and speed ovens in particular also offer tremendous menu flexibility, combining the functions of three or more pieces of equipment into one, and fast cook times.

Investing in new equipment, especially an entirely new cooking platform, is expensive and requires a relatively fast payback in reduced labor, energy costs, increased productivity, or all three. The key is squeezing as much productivity from the new equipment as possible. “A Mexican family restaurant concept in Mexico City put in a conveyor charbroiler to grill meats,” says Godward. “With a little experimentation it found many more uses for the equipment. Now the restaurant cooks seafood, poultry and even nopales.

Selectively invest in technology. Technology is adding immeasurable value (in most cases) to our jobs and our lives. As noted above, when technology is applied to kitchen equipment, the result is often simpler for employees to use and delivers more consistent results. But that doesn’t mean you should get the latest, greatest version of all the equipment in your kitchen to save labor. If you’ve already invested in a clamshell griddle, for example, maybe you can save money by using the griddle to toast buns as well. Centerpiece stone-hearth pizza ovens do a great job on much more than pizza, including sandwiches, proteins and vegetables, and even individual portion casseroles.

Technology also is changing the way customers communicate and interact with your brand. Mobile apps, online ordering, self-ordering kiosks, social media pre-ordering networks and more are among the multiple ways in which customers are choosing restaurants and what to eat, ordering and paying for their food, and deciding where to consume it.

A year ago, Wendy’s announced at an investor conference that it intended to put 1,000 self-ordering kiosks in its system by the end of 2017. The move was intended to strengthen the brand with consumers, particularly millennials, and save labor costs. Panera Bread also rolled out its “Panera 2.0” version kiosks to more than 400 stores, and McDonald’s has tweaked its Australian kiosk experimentation here in the U.S. under the “Chef Crafted” banner where consumers custom-design their burgers on tablet kiosks.

Things like kiosks may help save labor, but be prepared to handle increased sales. When tied into POS systems, all this technology helps capture more customer data, eliminate mistakes, and speeds service and payment. In many cases, instead of reducing labor, operators are using existing staff or adding more to handle the increased volume that’s resulted from faster service and greater productivity.

Marshal your resources. Match skills to jobs. That sandwich maker who’s slowing down the drive-thru at lunch? Move that maker to the cash register for a couple of hours and let Speedy Gonzalez take over sandwich assembly.

Schedule accordingly. Yes, you want to be fair to all employees and give preference to more senior and more skilled workers. But if you need certain skills on Friday and Saturday nights that weekday workers have, adjust their schedules accordingly, and compromise if the change might mean losing a solid performer.

Also, find ways to make the staff you have more efficient. Prep food that will keep, for example, in larger batches. Instead of having an employee slice only enough cheese for a shift, say 20 lb., have them slice 40 lb. before having to clean the slicer for the next use.

Make A Menu Assessment
“Diametrically opposed to automation, the other concept we’re seeing is more food theater on core or specialty menu items,” Starr says, “such as using a wood-fired oven in a pizza restaurant because your crust is what you’re known for.”

Find your food focus. Whether you focus on your core items through automation (combining consistency with ease of operation) or theater (attracting customer attention away from other processes), that focus enables you to operate each shift with fewer skilled employees and more unskilled workers. Instead of four line cooks who really need to know what’s going on to pull it all together, for example, you may need only one skilled cook and a few unskilled employees behind the scenes.

The singular focus also may help you:

Simplify your menu. While some chains, like Cheesecake Factory and Red Lobster, have figured out how to manage huge menus through years of operations experience, it’s hard to train people adequately to handle a large menu, according to Godward. “Focus the menu on items that your customers really want and prepare them very well. Get rid of menu dogs.”

Outsource some tasks. If you’re known for biscuits, or pizza crust, make it on site. But outsource prep of other items, like pizza sauce, or honey-butter to save on labor in house. Purchase more pre-prepared vegetables or salad ingredients, for example, instead of prepping them in your kitchens. Centralize production of soups, sauces, dressings and the like. Make them in volume and invest in a small blast chiller to extend shelf life.

Keep your eyes open for talent. “I learned as a franchisee to keep a list of potential candidates on a constant basis,” Godward says. “And if you find a really good candidate hire them, fit them in somewhere, and move them to a better or more appropriate position later.”