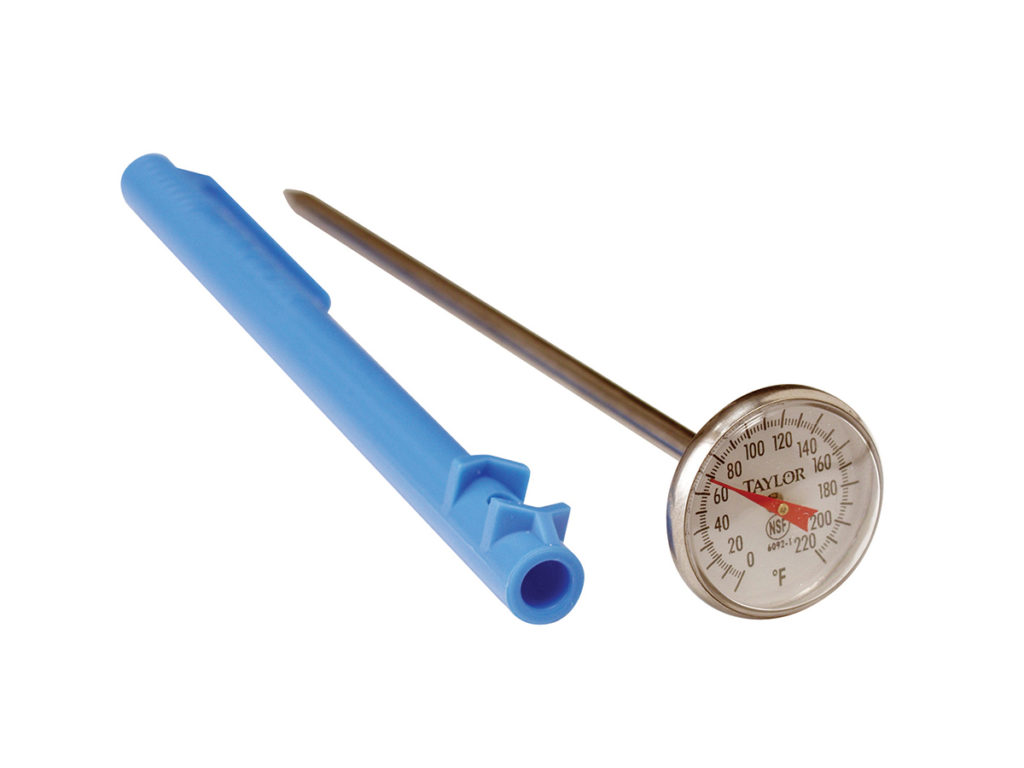 If your kitchen prep area is 60°F or warmer, did you know it only takes an hour for the salmonella counts on raw chicken to double? If you’re preparing cold foods, ingredients need to be brought out as needed in small batches from the walk-in or set on ice if you want quantities close by while you work. The only way to know your food is holding cold under 41°F is with a reliable thermometer pocket probe.

WHICH PROBE-TYPE THERMOMETER TO CHOOSE?
The most basic choice you need to make is between three types of hand-held probe-style thermometers and it all starts with these questions: Which food items do you need to temperature-track, how quickly and how often?

1) Bi-metal: Least expensive, slowest read, biggest probe, analog temperature dial. Contains two types of metals “coined” together in strips wound into a coil. As it’s inserted into food, one metal expands faster than the other and the change rate and temp differential translates into a temperature. Notes: You have to insert the probe tip at least . in. beyond the little dimple in the probe, which is about 2 in. up from the tip. Good for foods greater than 4- to 5-in. thick. Reads temps (range is 0°F-220°F) in about 15 to 20 seconds. Look for name brands.

2) Thermistor: A great quality thermometer choice, quick read, narrow probe, digital readout. Measures the change of resistance of a metal-oxide resistor pressed into a bead and encapsulated in the probe tip, which is fine (1.5 mm dia.). Includes a tiny microprocessor to compute temperature and displays it on a LCD digital readout. Notes: Reads at the probe tip; good for thick and thin foods such as burgers and fish. Reads temps (-58°F-302°F; -58°F-500°F;-40°F-450°F) in about 5 to 6 seconds.

3) Thermocouple: Most expensive, instant read, narrow probe, digital readout, some versions can come with interchangeable probes. Contains wires of two different metals joined at the probe tip and the meter end; a current flows to the meter end. The meter measures the current in millivolts and translates these into temperature measurements. Notes: Reads at the probe tip, which is fine (1.5 mm dia.); good for thick and thin foods such as burgers and fish. Reads temps (-58°F-662°F) instantly (can actually read even lower and higher temps). The most accurate and fastest of the thermometers.

CALIBRATE!
Bi-metal dial thermometers need to be calibrated regularly.
1) Fill a tall cup with crushed ice, add cold water, let it sit for 30 seconds, give it a stir.
2) Take the probe out of its tube case, push the probe through the hex-nut-shaped hole in the side of the case until the hex-nut under the dial head seats properly.
3) Submerge the probe tip into the ice water at least. in. above the little dimple in the probe; don’t let the tip touch the sides or bottom of the cup.
4) When the dial gauge stops moving, check that it’s at 32°F. If it isn’t, turn the dial head until it does read 32°F.

TIP: Wipe the probe clean and use an alcohol swab to to sanitize it both before you take a temperature and before you stick it back into its tube case.