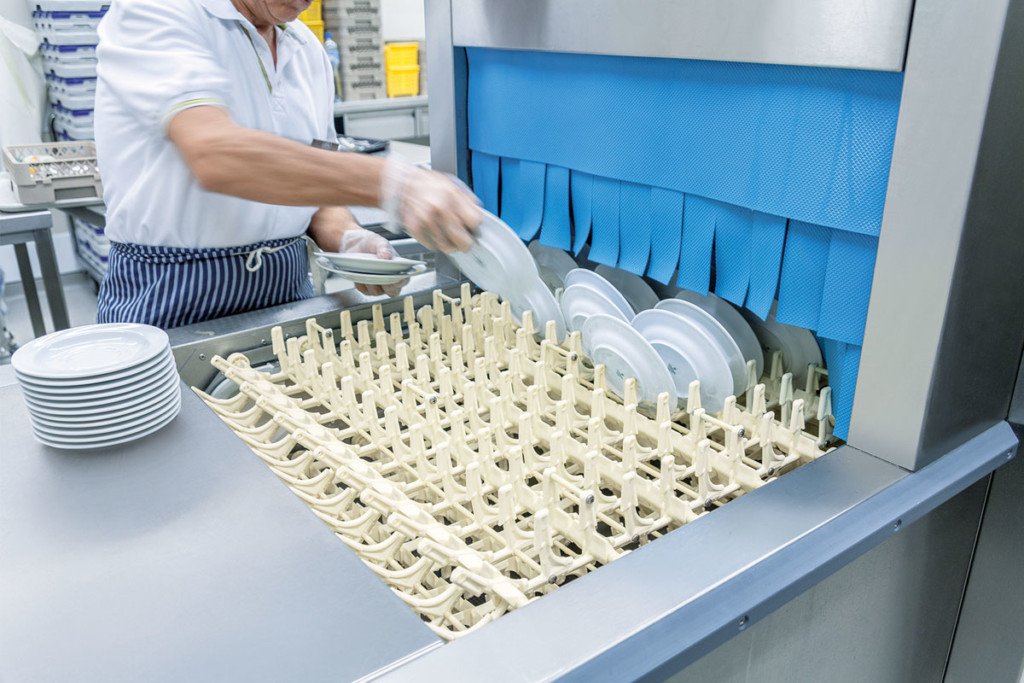 With a steep price tag of several hundred thousand dollars, flight-type dishmachines are kitchen investments worth protecting. And with outputs of 45,000 dishes per hour, when these units break down, casinos, hospitals and other high-volume foodservice operations can quickly get buried under a mountain of dirty dishes. Service agents share the following advice, based on the most common mistakes they see in the field.

BE THOROUGH WITH CLEANING. Flight-type dishmachines don’t require any more extensive cleaning than single-rack machines but because there is as much as 25 ft. of machine to clean, users often stop short of the necessary steps.

“We find many users just empty the tank and shut off the machine,” says Daniel Reese, director of training for the Commercial Food Equipment Service Association. “Really, the unit’s screens and wash arms should be taken apart and cleaned each night. If something like the pump intake screen doesn’t get really cleaned out, the unit doesn’t get enough water, and it won’t wash properly.”

Left uncleaned, food debris also can get caught in the floats in the tanks, which could send an incorrect signal to the unit that there is water in the tank. “This starts the cycle, firing the burner and it gets so hot in the dry tank that it can distort the metal and even burn a hole in the bottom of the tank,” says Isaac Lock, a service manager with Hagar Restaurant Service.

REGULARLY DELIME. Any equipment that uses water needs regularly scheduled deliming to prevent scale buildup. “Scale acts as an insulator, causing a need for more energy to heat the water,” says Reese. “Eventually the performance will go down while the cost of operation goes way up.”

USE IT AS INTENDED. It may seem obvious, but service agents say they have to remind users that flight-type dishmachines wash dishes and silverware only. Techs have seen operations really push the envelope by placing in equipment such as slicers and warmers, or even mops, floor mats, ladders and clothing.

“We had a client that eventually created a cleaning steward position in which they paid one staff member a bit more to manage the maintenance on their flight-type dishmachine.” —Daniel Reese, CFESA

ASSIGN OWNERSHIP. “Typically, flight-type dishmachines don’t just break and shut down suddenly,” explains Lock. “They typically have some sort of failure that either someone doesn’t recognize, or that someone ignores, and then it just gets worse and worse.”

With high turnover and regular shift changes, staying on top of user training for this equipment is a challenge for any operation. “We had a client that eventually created a cleaning steward position in which they paid one staff member a bit more to manage the maintenance on their flight-type dishmachine,” says Reese. “They said that 90% of their service problems on the unit disappeared because one central, consistent person was taking ownership of it.”