And the show is only growing. Its 41st edition, October 18-22 at Fieramilano, has signed up nearly 2,000 companies to exhibit, including nearly 800 from 54 countries outside of Italy. Overall, with three months before the show, that’s an 8% rise in exhibitors.

Those numbers are matched by the more than 1,500 operators from 80 countries registered as hosted VIP Buyers—about 10% of the expected 150,000 attendees—and organizers still have room for qualified buyers to join the U.S. delegation. Host partnered with associations in the U.S., Canada, Brazil, the UAE, China, Japan, Australia, Spain, and India to offer all-expenses paid trips to the five-day show. FEDA, which sent two dozen dealer members to the 2017 show through the VIP Buyers program, has partnered again with Host, as have SEFA and FCSI.

Trends, including sustainability in food, coffee and design, will be on display and in action at the more than 500 events show organizers call “a global kitchen” offering exhibitions, cooking demonstrations, roundtables, and cook-offs. 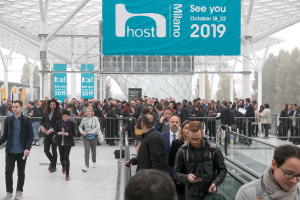