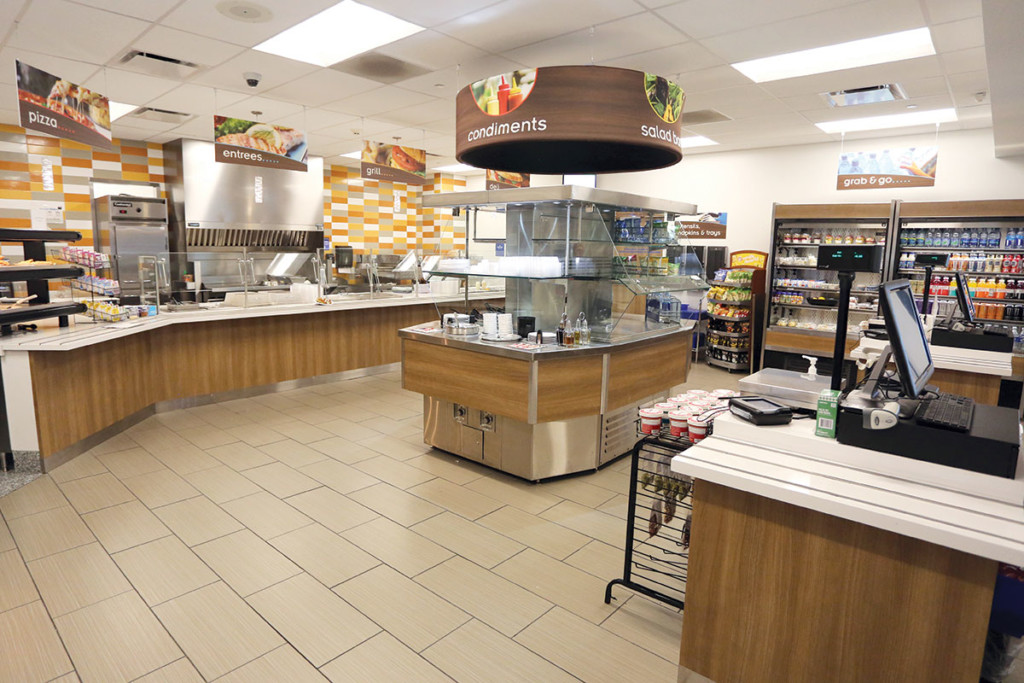 “Everything.” That’s the answer Foodservice Manager Jose Palacio gives when you ask what he likes about the kitchen and Neighborhood Bistro at the 50-bed Intermountain Layton Hospital in Layton, Utah, opened in October 2018.

“The flow is wonderful, the equipment is the best technology in the business right now and everything is centralized for our kitchen employees,” says Palacio.

Sous chef Josh Broadbent agrees. “From a cook’s perspective, it really is dialed down to everything being where you need it to be,” he says. “You don’t need to run or walk anywhere to find what you’re looking for.”

John Egnor, FCSI, principal of foodservice design and consulting firm JME Hospitality, says that the focus on functionality was there from the beginning as the hospital was being planned. “The architect and owner wanted the foodservice space to be as functional as possible, and designated just the right size of 5,000 sq. ft. to it,” he says.

“Intermountain is a huge proponent of making everything as efficient as possible,” Egnor says. “We designed function and flow into every area. There is nothing circuitous about the design; food and supplies come into the kitchen at one end and go out the other with no redundant operational flow.” Food flows from the loading dock to the storage area to the prep area to the kitchen to the serving line to the customers, who then deliver their dirty trays to the warewashing/waste treatment area at the far end of the facility.

As for the equipment selection, designers noted that the culinary team wanted the ability to prepare any menu item they might come up with. “The equipment had to be fairly robust yet functional and able to perform multiple tasks,” says Egnor.

Egnor points to a cluster of Montague equipment that includes a griddle, countertop underfired broiler, open top range and salamander. Maintaining the same family of equipment not only allowed purchasing at a better price, he says, it gives Layton consistency when it comes to service calls. “One service company can repair it all, rather than having to pick up the phone and call several companies,” he says.

To provide a healthful menu, Layton doesn’t offer fried foods to the hospital’s patients and bistro customers. Instead, it relies on two Ovention Matchbox ventless ovens for French fries, chicken nuggets and other traditionally fried foods.

Using an impingement cooking system, the ovens move product into a sealed chamber rather than transporting it on a continuous chain belt. One of the units at Layton features circular racks. One meal is placed on one side of the divided rack, another meal on the other side. The oven moves one meal into the heating chamber; when the meal is cooked, it rotates out as the other meal rotates in. Controls allow employees to program the oven to cook the first meal, say a protein for finishing, for a certain time and temperature and enter a different program for the second dish, say grilled vegetables. The oven cooks each dish to its own recipe specifications.

“The automatic handling of two meals lets the employee do other things at the same time. You can still keep making an omelet without having to go to the oven for the second task,” says Egnor. “It makes employees more efficient and productive.”

“The food tastes great and isn’t overcooked,” says Palacio. “We also use these ovens for reheating certain items like chicken. They work better than a microwave and food doesn’t come out rubbery.”

Another equipment highlight in the bistro includes the Wood Stone stone hearth oven, which employees use to cook pizza. “Intermountain wanted a retail side that had something different that would create visual impact and turn out pies that looked fresh and not from a chain,” says Egnor.

The use of innovative technology in the project doesn’t end at the Neighborhood Bistro’s cookline. All protein and vegetable food waste is weighed using Leanpath technology and then goes in a Power Knot LFC-200 biodigester where it is turned into liquid that drains with the rest of the operation’s wastewater. Using enzymes, the device breaks the food down through an aerobic process and diverts tons of food waste from the landfill.

The kitchen staff weighs all wasted food using the Leanpath system to track how much food is wasted and when during the day to get a picture of what’s popular and what’s not. The food waste then goes into the biodigester where it drains after it liquifies. “We don’t have a full year of data yet, but so far we’ve been able to modify our side dish offerings based on how much is wasted,” Broadbent says.

The biodigester also tracks the total weight of the food it liquifies, providing daily, weekly and monthly updates. “Those reports give us an idea of how our environmental impact has decreased,” says Broadbent. “Last month we diverted almost 2,000 lb. of waste from the landfill. It’s incredible to see how we’re impacting the environment and saving money in waste disposal costs in the long run.”

From the food and supplies coming in at the loading dock to the liquid waste draining away from the landfill, it seems like the “everything” that Palacio likes about the hospital’s foodservice operation is flowing just fine.