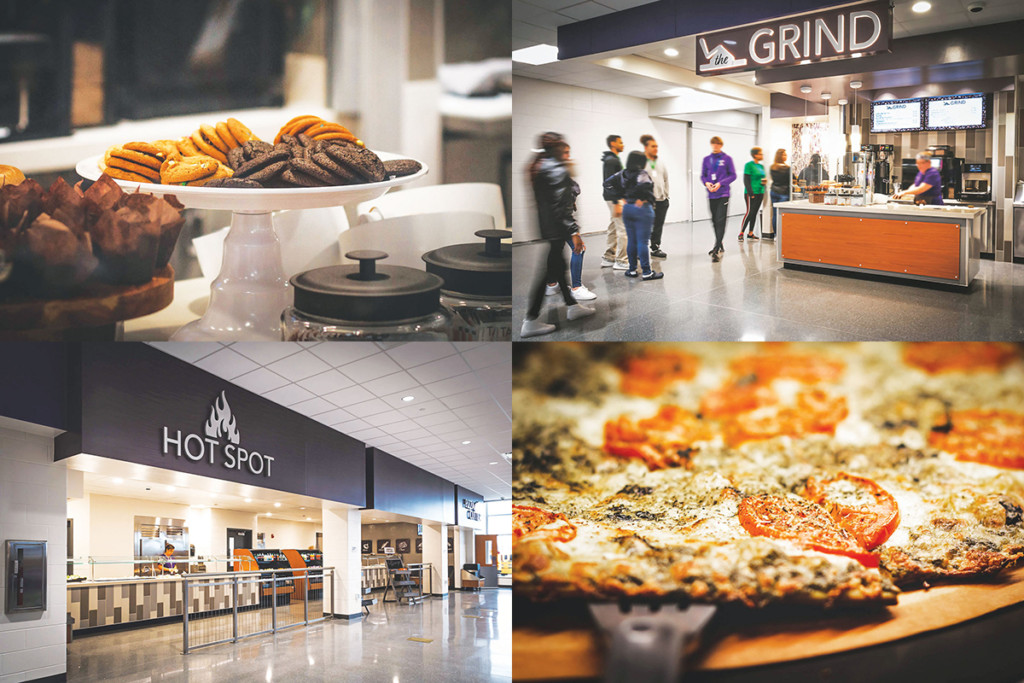 The Brownsburg High School Cafe, opened in January 2020 in Brownsburg, Ind., has been a game changer for the school. The new servery, with its combination of assembled-to-order and grab-and-go choices, has boosted food quality, variety and school spirit. Featuring 860 seats, the BHS Cafe is nearly triple the size of the previous cafeteria, and as a result, student meal participation has risen 12%.

The biggest growth, however, has been in a la carte revenue, largely driven by sales at the new coffee station. “Two months into operations, retail sales have increased by about 30%,” says BHS Nutrition Services Coordinator Jordan Ryan.

The path to BHS’s new servery started in 2014. Brownsburg, a suburb of Indianapolis, was seeing its population grow faster each year. The high school’s infrastructure was nearly 50 years old, its classrooms overcrowded and its cafeteria undersized. The goal for Brownsburg Community School Corp. administrators was to rebuild and expand the school’s central area. They envisioned a comfortable learning environment to accommodate a near-doubling of enrollment, from 2,500 students at the time to 4,500 in the future. In 2017, the BCSC Board of Directors approved the expansion plans. And in January, the $62 million, 450,000-sq.-ft. expanded and renovated core of the high school opened to students, with BHS Cafe at its heart.

The servery owes its interactive layout in part to BCSC COO John Voigt. By late 2017, administrators had finalized plans for the school’s new kitchen. The kitchen designer’s preliminary sketches for the servery echoed the previous cafeteria—a traditional, straight-line affair. At that point, Voigt reached out to Reitano Design Group, Indianapolis, for a second opinion.

“We suggested an open concept servery with multiple food venues and common point-of-sale locations,” recalls Principal Scott Reitano, who introduced Voigt to some of his firm’s other servery projects. A few months later, Reitano and team came onboard, and partnered closely with Ryan.

The main goals for the BHS Cafe centered around increasing customization and menu variety, and boosting speed of service. Station choices, layout and finishes combine into a destination with faster, shorter queuing, capable of serving 450-plus students in an average of 10 minutes, across three 30-minute lunch periods.

The main goals for the BHS Cafe centered around increasing customization and menu variety, and boosting speed of service.

“We wanted the new cafe to showcase our new menu, which is 80% made-from-scratch,” Ryan says. Savvy equipment choices made this possible. “We found great success in using the heated shelves and frost tops, which allow us to present the menu in a way not typical to school settings, and they add color to the cafe itself during meal service.”

The 4,353-sq.-ft. servery features eight stations: The Grind (coffee), Breadbox (deli), Rotation Station, Chef Central (display cooking), Garden Greens, Hot Spot, Pizza Cutter and Produce Market. The servery’s layout, influenced by the footprint of the support kitchen immediately behind it, resembles a stretched “W” with the coffee area situated on one side and the pizza station, the other. Food flows from the kitchen to the serving points via hot and cold pass-thru units at many stations.

“We found great success in using the heated shelves and frost tops, which allow us to present the menu in a way not typical to school settings.”

The servery’s focal point (and a student favorite) is Chef Central. It offers the most customization thanks to Chipotle-style service, with servers adding toppings to customer preferences. The station has two lines that mirror each other with regard to equipment. Students choose their proteins and grains at the center point, and move to the right or left down the line to customize their meal. Condiment areas at the end of each line add extra choices.

“We purposely planned our most popular and time-consuming-to-serve items for Chef Central, such as a BYO [build-your-own] nacho bar with grilled shredded chicken or beef, black beans, queso, shredded cheese, salsa, sour cream and jalapenos,” Ryan says. “Customers are drawn in by the action station where chefs cook parts of the menu on the serving line using a couple of induction burners.”

Two island counters make up the Produce Market, featuring cut vegetables and fruits in easy-to-grab paper containers, enticing students to eat more fresh food. “The Produce Market helps us increase fruit and vegetable consumption by using behavioral economics,” Ryan says. “By placing it between customers and our cashier stations, after they have chosen their entree, students have a choice of adding one more thing before they check out.” Each island includes a hot well, frost tops and space for fresh produce baskets.

“The Produce Market helps us increase fruit and vegetable consumption by using behavioral economics. By placing it between customers and our cashier stations, after they have chosen their entree, students have a choice of adding one more thing before they check out.”

Hot/cold wells throughout the servery provide menu flexibility. “For example, at the Rotation Station, we can offer a BYO Mediterranean bar one day with chicken shawarma and yellow rice, along cold hummus, tzatziki sauce and tabbouleh salad sides, then a BYO chicken wing bar the next day with hot cheesy potato bake and mac-and-cheese as sides,” Ryan says.

Designers strategically located the Pizza Cutter at the far end of the servery. “That way, when lines form, they won’t impede other stations,” Reitano notes. A double stack impinger oven anchors the station and continuously turns out 16-inch specialty pizzas, including barbecue chicken and Margherita pizzas, throughout the meal periods.

The coffee station, The Grind, has become the driver behind the boost in a la carte revenue. “Students can choose from specialty hot or cold coffee drinks made using our [full-service coffee machine] and a couple of blenders,” Ryan says. “In addition, students can choose from pastries including bagels, cookies, homemade cinnamon rolls and muffins. All can be toasted or warmed in the speed oven. This area has been a huge hit with our customers before, during and after school.”

Along with the open-concept design and well-equipped serving stations, designers put thought into some of the smaller elements in the servery.

Shortly after opening, Ryan says all is well at the BHS cafe. “This has been the most challenging project of my career to date, but I could not be prouder to offer this space to the students at BHS,” Ryan says.