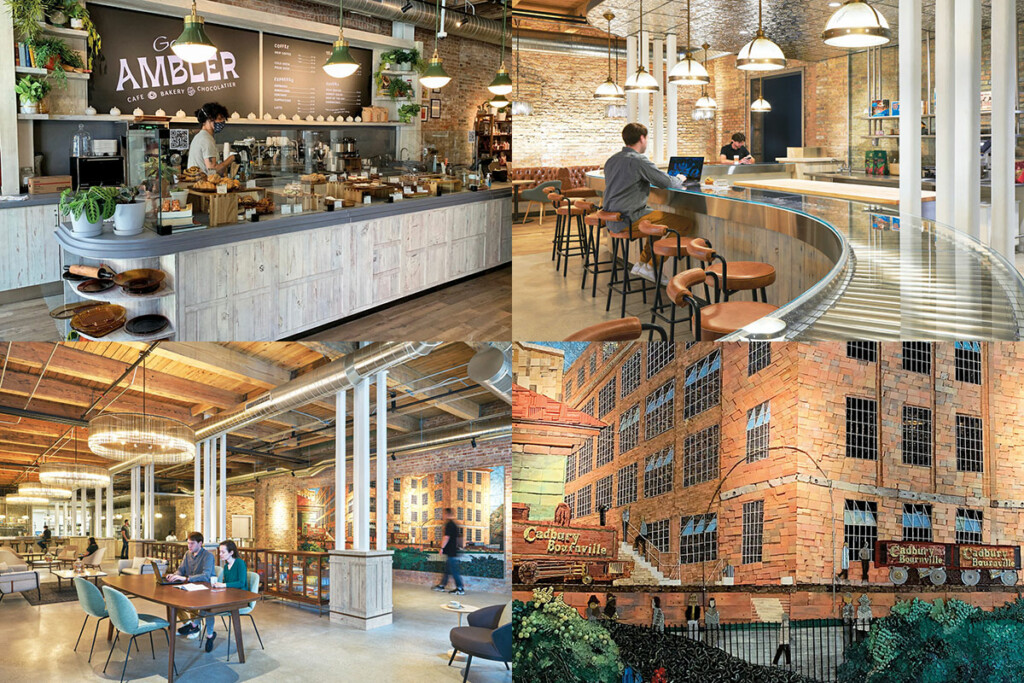 When Mondelez Int’l., the global snack food giant, moved its workforce from the Chicago suburbs to a downtown headquarters, the company took an unusual spin for its on-site foodservice: a bakery-cafe called Good Ambler, specializing in patisseries, espresso drinks and fine chocolates.

Mondelez, which reported $26 billion in sales last year, in April welcomed its nearly 400 employees to their new home in a five-story revamped brick structure in Fulton Market, an industrial-turned-trendy district just west of downtown Chicago. The building and the entrance to the cafe sit just off the sidewalk, and the public is welcome.

Good Ambler’s look and feel is warehouse-chic. Exposed brick walls and an unfinished wood beam ceiling, including a pressed tin drop ceiling over the bakery to meet health code requirements, are accented by handcrafted glass light fixtures and a variety of seating. Along the main wall, a one-of-a-kind mural made of found construction materials (brick, wood and nails) depicts a city street scene with a pair of Cadbury trolley cars. At the cafe’s entrance sits the coffee and pastry bar. Toward the back lies the display bakery and chocolatier station, delineated by a curving bar counter where guests can watch chefs in action.

That Good Ambler belongs to Mondelez Int’l. is not readily apparent. And that is by design.

“One of the main reasons for moving from the suburbs to Fulton Market was to be more in touch with consumers,” says Jason Larry, Mondelez vice president for global real estate and facilities. “We wanted [our] branding to be subliminal, as we didn’t think the consumer would be attracted to ‘The Mondelez Lobby.’ Instead we want Good Ambler to [convey that] we are makers and bakers who are consumer-obsessed and want to bring people together. This is why we have chefs in the cafe making homemade treats in front of the consumer, using some of the ingredients core to the Mondelez portfolio. The space also serves as a gathering space—either for Mondelez employees or consumers to connect (or unplug) without feeling they are in a corporate space.”

Chicago hospitality company 16” on Center operates Good Ambler with veteran pastry chef Kevin McCormick (Beacon Tavern, North Pond Cafe, Per Se) at the helm. And although the Mondelez portfolio includes such brands as Oreo, Toblerone and Chips Ahoy!, none of these can be found at the cafe. Instead, the menu offers indulgences such as flaky croissants, coconut ginger cake, many-flavored bonbons or the Elvis, a peanut butter crunch/caramelized banana ganache candy bar, to name a few. A full line of espresso and tea beverages round out offerings.

The mural is made of found construction materials (brick, wood and nails) sourced nearby in Fulton Market.

“A bakery-cafe is an unusual decision for corporate foodservice, but in this case, it fits,” says Cini-Little’s Kevin Banas, the project manager who oversaw foodservice design for the cafe. For one thing, the neighborhood has few shops nearby specializing in baked goods, although there are plenty of restaurants within a few minutes’ walk.

A bar seating area wraps around the display bakery. Of note: the drop ceiling fitted in vintage-looking pressed tin tiles.

“One of the main reasons for moving from the suburbs to Fulton Market was to be more in touch with consumers.” —Jason Larry, Mondelez

From Warehouse to Bakery

Taking a note from the building’s warehouse past, the see-through bar top features repurposed stainless rollers from an old conveyor belt.

The creative process for the former warehouse building’s ground floor involved compromises between interior design and foodservice design. “There’s always some push and pull when it comes to visual appeal versus health code requirements,” Banas says. “We all wanted to preserve, where possible, the brick walls, wooden floors and open ceiling. But brick and foodservice are a bad match—the porous, uneven surface is hard to clean, especially in the bakery.”

Crews retained the brick backdrop by offsetting equipment from the wall and adding an easy-to- clean Plexiglas panel over the brick.

The solution for the display bakery station was simple. “We offset equipment from the wall and added a floor-to-ceiling Plexiglas panel over the brick,” Banas says.

A shelf above the bakery’s back prep table displays three vintage Easy-Bake Ovens (no connection to Mondelez) in their original boxes.

Designers finished the back wall of the chocolate area in easy-to-wash white tile-like panels. As for the health department requirement for a drop ceiling over the food prep area, the interior design team installed an old-fashioned style, pressed-tin tile ceiling for the area directly above the bakery and chocolate stations.

The display bakery and chocolate station occupy an L-shaped area at the back. A curved bar with 13 barstools provides customers a front-row view of the pastry action. In a nod to the building’s warehouse past, the bar top features repurposed stainless rollers from an old conveyor belt, under a glass surface.

Corporate branding at Good Ambler is subliminal by design. Instead of promoting Mondelez, the interior look and feel conveys that “we are makers and bakers who are consumer-obsessed and want to bring people together,” says Jason Larry, Mondelez vice president for global real estate and facilities.

The display baking area includes a wood-top freestanding table, ingredient bins, under-counter refrigeration, dry storage, and in the corner shared with the chocolatiers, a mixer and double-stack oven. The chocolate area has a marble-top prep table, cold storage, dry storage and a tempering machine.

Behind the two stations is the rest of the kitchen. “The back-of-house is where the misen-place takes place,” Banas says. A freestanding prep table for dough mixing and ingredient prep anchors the space. Surrounding equipment items include induction burners, ingredient bins, overshelves, as well as a walk-in cooler/freezer and warewashing.

“Good Ambler’s kitchen focuses on small batches and craftsmanship rather than industrial-scale production,” McCormick says. There is, as McCormick points out, plenty of space to add more equipment as demand grows.

At press time, Good Ambler’s coffee and pastry counter was open for walk-in and carryout business, but the seating area beyond remained closed as a result of COVID-19 restrictions. The cafe managers look forward to the time when everything can fully reopen.