3 Mistakes to Avoid With Ranges 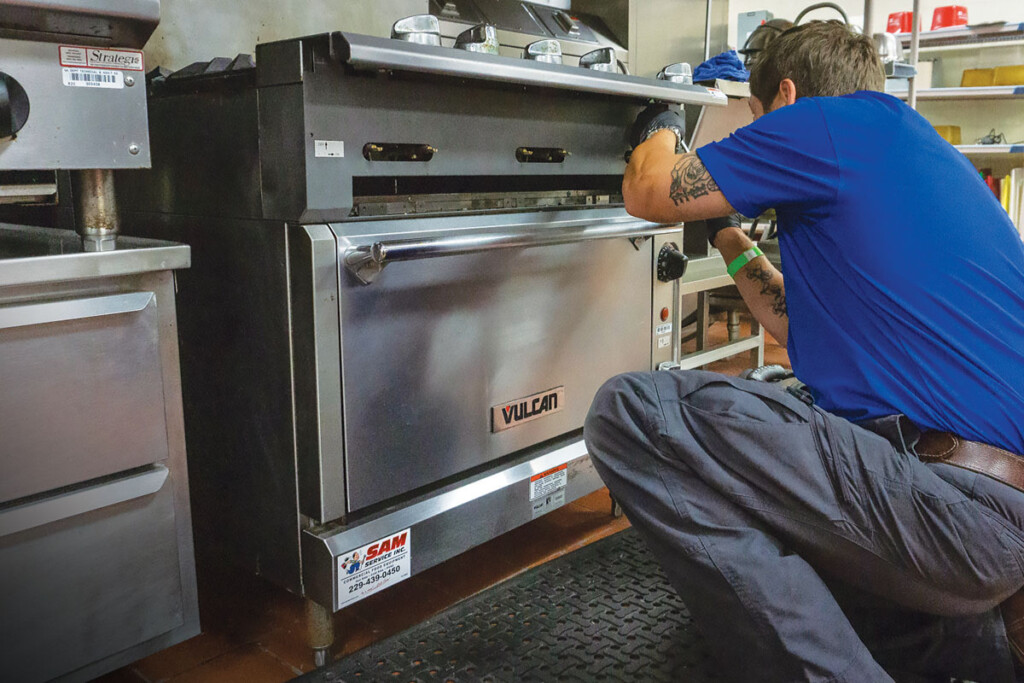 Tony Adiano of SAM Service takes the front cover off a range to service the gas valves.

John Schwindt, general manager/vice president of operations at Hawkins Commercial Appliance Service Co., and Tony Adiano, headquarters service manager at SAM Service, have seen a fair share of abuse when it comes to ranges. Stories stretch from an operator who placed cookie sheets on a range to burn the carbon off, only to trap so much heat beneath the sheet that the range’s components burned, to another who specified casters for the range’s ends, but not the middle, only to watch it bow under the weight of stockpots.

To help operators avoid expensive repair bills, the service agents point to the more common mistakes they see, and how to avoid them.

Adiano agrees. “The biggest issue I see is when chefs have spillovers and never take the time to clean them up. Spills and all kinds of food bits can clog up the crumb trays around every burner. I’ve seen crumb trays that have actually caught fire; that kind of damage is beyond repair.”

Watch for grease spills and clean them immediately. “Grease can run down and saturate the oven’s insulation,” says Schwindt. “That grease takes the place of air in the insulation, minimizing any actual insulating. If you have bad insulation, you can’t hold temps properly and everything gets too hot.” A unit with grease-laden insulation isn’t cost efficient to repair, he says. “You might as well buy a new range instead of spending thousands of dollars in repair costs to pull it apart and replace the insulation.”

Frequently cleaning the burners and crumb trays keeps maintenance costs down, says Adiano. “If you do have to call a service agent to look at your gas range, your regular maintenance efforts could keep the call down to an hour or so to tweak a couple of burners. Otherwise, it could end up being a costly four- or five-hour job where we take off each burner, clean it and reset the air dampers to get the optimum gas/air ratio.”

“The biggest issue I see is when chefs have spillovers and never take the time to clean them up.” —Tony Adiano, SAM Service

2. NOT SPECIFYING THE RIGHT RANGE FOR THE JOB.
Don’t buy a six-burner range and put large, 100- qt. stockpots on the burners. “The heat from the burners can’t escape around the pan; it’s blocked under the pan’s bottom and the around the burner valves that feed gas and air to the burner,” says Schwindt. “This [also] makes the knobs hard to turn and can be dangerous.”

Buy a stockpot range if you’re using large stockpots. And as mentioned, order enough casters to properly support it.

3. IGNORING YELLOW FLAME.
If your gas burners produce yellow flame instead of white and blue, the air shutters in the gas valves to the burners may be clogged, letting too little air into the gas/air mixture. “Those shutters draw in air, but they also draw in whatever is in the air: grease, lint and other solids,” says Schwindt. “The lack of air produces the yellow flame that has more fuel in the mixture and turns the bottoms of pots black.” Schedule a deep cleaning of the gas valves with a service agent each year, he says.