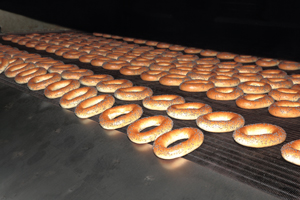 A bagel maker in upstate New York had built up a great local business turning out fantastic bagels. The product was so good, and so well known in the area, he’d been approached by a local grocery store chain to supply their bagels. Worried that the four rotating-deck ovens he’d been baking in wouldn’t be able to keep up with the new business coming in, the owner went to the deck-oven maker for a solution. “I don’t know who the heck he talked to, but they really didn’t know what they were talking about,” says Paul Toukatly, Co-Owner and Service Manager for Duffy’s Food Equipment Service & Parts, based in Sauquoit, N.Y. “The bagel operator believed a conveyor approach would work, but he ended up with a really bad solution.” The vendor had literally bolted four large conveyor ovens together with one conveyor belt running through all four. The ovens, spanning about 30 ft. end-to-end, had 4-in. gaps between them. “Each oven had its own temperature control and they could never keep in sync or at temp,” says Toukatly. “We were constantly being called out to adjust temperatures and to remove links from the conveyor belt because this unnatural ‘custom’ setup constantly stretched it out.” Needless to say, quality slipped drastically, and sales followed. “He finally gave up and invested in a really high-quality conveyor oven, the kind you’d find in a commercial-grade bakery,” Toukatly continues. “It took four forklifts to get it in, but it was what he should have invested in to begin with.” Very sadly, he says, it was too late. “He lost the grocery customer in the transition and eventually, his business closed.” Toukatly says he can’t think of a more cautionary tale to illustrate how important it is to understand what you need your equipment to do. “I felt really badly for this operator, he had a great business that failed 100% because of a wrong equipment application. Someone sold him a very impractical solution to what should have been a great problem—more business.”