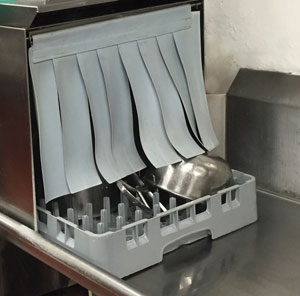 When Gary Petitti, President of Gary’s East Coast Service in Shelton, Conn., received a service call in the wake of Hurricane Sandy, he never anticipated that human error would end up being the real underlying problem.

“I had a scheduled follow-up service call at a school on their dishmachine,” Petitti explains. “We had already diagnosed a leaky pump seal that I needed to replace.” An impaired seal means water can leak into electrical components, eventually with catastrophic results. After navigating his truck through the destruction caused by the storm, Petitti finally arrived to the site to find the school without power. “You don’t need any power to replace a pump seal,” says Petitti. “So, I replaced it and then tested it by filling the unit up with buckets of water.” Assured the seal was working, Petitti drained the unit and left.

Unfortunately, the next morning after the building’s power had returned, the service company received another call from the school to report that the unit now was powering on, but it wasn’t operating. “I thought it was extremely bizarre since the pump seal shouldn’t have had this effect on the overall operation of the dishmachine,” Petitti says. When he returned to test the dishmachine, he found that there was no pump pressure in the machine, which means no water was spraying into the unit at all, never mind leaking. “I realized the pump was essentially running backwards.”

Petitti had also noticed the elevator was out even though power was back on. “So I asked more about the power outage and found out the building’s transformer had been blown.” He suspected that the dishmachine and elevator were down for the same reason—they both rely on three-phase motors. “When the electric company reconnected the transformer from the pole to the building, they reversed two phases, which will cause any three-phase motor to run backwards,” explains Petitti. Most equipment—which is single-phase—isn’t affected at all by this reversal. “I reversed the two phases at the machine itself and everything worked fine,” says Petitti.

A day later, Petitti received yet another service call about the dishmachine not operating. “Rather than calling an elevator technician to reverse the phases at the elevator, they had the electric company come back out and reverse the two phases at the transformer, back to how they were originally. So I had to switch them back once again at the dishmachine before this was all over,” Petitti laughs. “And I was only there to fix a leak!”