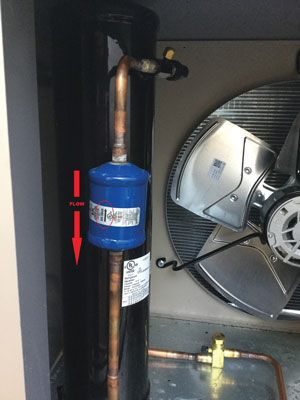 Recently, Allen Alligood, Technical Service & Parts Administrator at SAM Service, Albany, Ga., was asked by a local c-store to update an aging beverage cooler with a new condenser unit and new evaporators. What should have been a typical install quickly turned into both a lesson and a headache.

“They’re one of our oldest customers, so we take really good care of them. We sent out a technician and a helper to replace basically all the refrigeration inside and outside this cooler,” says Alligood. A beverage cooler functions like an ordinary walk-in cooler, but includes one wall of display doors that give customers access to the beverages. After the install, the technician tested the machine and everything checked out fine. “Unfortunately, the next day we got a call saying that the cooler was warm and the evaporator coils had iced up. We immediately sent the same technician back out there,” explains Alligood. But as the technician began checking operations, it became apparent that none of the typical problems were present.

“We went into full-blown troubleshooting mode,” Alligood says. “We started looking at worst-case scenarios—the condenser and evaporators could be mismatched sizes or the insulation could’ve degraded and thrown off the R-value.” The R-value determines the insulation’s resistance to heat. After running through the manufacturer’s extensive suggestions as well, Alligood eventually decided to send out a different technician to get a new set of eyes on things. “Immediately, he found that the drier had been mistakenly installed backwards at the factory,” explains Alligood. The drier is a filter attached to the liquid line that removes moisture from the refrigerant. If it’s not working properly, moisture may freeze inside the line and shut the unit down. Thankfully, the condenser had not been damaged by this reversal and the problem was finally fixed.

However, the next day the store reached out once more because the evaporator coils were again icing up. Luckily, Alligood and his team had learned from the last fix to ask some simple questions first. Starting with the absolute basics—in this case, with the thermostat—they found out the night manager had come in and cranked the temperature down as far as it would go, Alligood explains. “The cooler was simply in defrost mode, but it seemed warmer to her, so she assumed that there was still a problem and overcompensated by turning the cooler down too low.”

It’s important that customers don’t try to tweak or fix their equipment before calling the service company. The additional variables often impede diagnosis or create a new problem altogether. As Alligood advises, “the best rule is to just leave everything as the servicer set it.”